When Hurricane Katrina struck, millions along the Gulf Coast were devastated and in need of assistance. Borne of disaster comes opportunity, and 2005 was the year Culligan Cares officially began, as we worked with the Convoy of Hope to provide five semi truckloads of bottled water to residents.

Working To Make It Better...One Drop At A Time

Hall's Culligan Bottled Water works with local foundations through churches, businesses and nonprofits to provide charitable efforts. We take seriously the responsibility to be caretakers of residential and commercial water supply. With help from Culligan International and other great partner organizations such as Convoy of Hope and the American Diabetes Association, we relish the opportunity to participate in projects that help the midwest community.

Likewise, with disaster relief and local community efforts, Hall's Culligan Bottled Water and CDANA (Culligan Dealers of North America) try to contribute efforts in areas of the midwest where clean water is a priority – not just in residential, but in places its needed most – schools, hospitals and nursing homes.

2017 was a crazy year for disasters, aided by an angry mother nature that saw major hurricanes in Florida and the Gulf Coast, to wild fires in California. All of it affects the way people use and consume water. Culligan Cares was there to help! 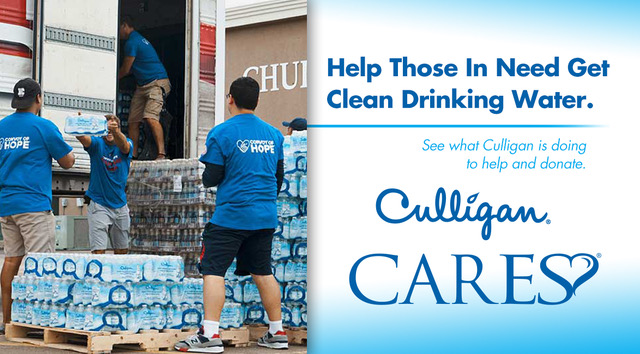 In February of 2017, Culligan Cares collaborated with the Water Well Trust to raise money for families that do not have access to clean water. The first well project was for a family of six in New York that had been on a well wait list for nearly three years, as their well was too shallow and had contaminated water.

Perhaps the biggest event of the year for Culligan Cares came in late August, when Hurricane Harvey ravaged parts of Texas and the Gulf Coast.

This included providing 6,000 bottles of water to the Katy Fire Dept. with assistance from the Culligan dealership in Houston, which supported over 200 first responders.

Culligan also partnered with Convoy of Hope, a disaster services team that helped provide food, water and hygiene items to tens of thousands of people without power and water, to deliver 1,500 cases. Overall, Culligan delivered more than 130,000 bottles of water to communities in need.

It’s our mission to help the midwest community in addition to providing high-quality water products that benefits each and every aspect of our customer’s livelihoods. We do receive donation requests.

All donation requests must be submitted in writing by filling out our donation request form on our Hall’s Culligan Water parent site here. We cannot accept requests via telephone. (NOTE: Due to the number of requests we receive, we cannot guarantee that submitting a request will result in a donation.)